The “forest spring” is a hot spring traditionally reserved for visitors.

It lies in a small forest of eucalyptus trees, reached by a picturesque drive—or hike—from Bawiti. The rough track passes oasis gardens where farmers plant, grow, and harvest a variety of crops interspersed with fruit trees.

On the way to Bir al-Ghaba, about 7 km (4½ mi) from Bahariya is Bir al-Mattar, a tepid spring with a slightly sulfurous odor; it’s on the left of the road and is a great place for a quick dip. After covering more desert, you enter a garden and, suddenly, Bir al-Ghaba appears. Camping is welcome here, and several primitive “camps” offer basic accommodation in thatched huts with no electricity.

in a depression covering over 2000 sq. km., Bahariya Oasis is surrounded by black hills made up of ferruginous quartzite and dolorite.

Most of the villages and cultivated land can be viewed from the top of the 50-meter-high Jebel al-Mi’ysrah, together with the massive dunes which threaten to engulf some of the older settlements.

The Oasis was a major agricultural center during the Pharaonic era, and has been famous for its wine as far back as the Middle Kingdom. During the fourth century, the absence of Roman rule and violent tribes in the area caused a decline as some of the oasis was reclaimed by the sand.

Wildlife is plentiful, especially birds such as wheatears; crops (which only cover a small percentage of the total area) include dates, olives, apricots, rice and corn.

There are a number of springs in the area, some very hot, such as Bir ar-Ramla but probably the best is Bir al-Ghaba, about 10 miles north east of Bawiti. There is also Bir al-Mattar, a cold springs which poors into a concrete pool

Otherwise near the Oasis is the Black and White deserts, though traveling to the White desert seems not practical from the oasis.

The Black Desert was formed through wind erosion as the nearby volcanic mountains were spewed over the desert floor.

Finally, there are the ruins of a 17th Dynasty temple and settlement, and nearby tombs where birds were buried.

Bawiti, Bahareya’s capital , is by far the largest village in the Bahariya Oasis with some 30,000 inhabitants.

The town center is modern, while outside the center are mud-brick houses. Recently, the town has received considerable press due to the find of a huge (possibly the largest) necropolis of mommies from the Greco-Roman era.

Over time, the Bahariya Oasis has had a number of different names. It has been called the Northern Oasis, the Little Oasis, Zeszes, Oassis Parva and the especially during the Christian era, the Oasis of al-Bahnasa, along with various other names.

Remains of stone tools found in the Bahariya oasis evidence the existence of settlements in the area as early as the Paleolithic Period.

Is seems that the Bahariya Oasis was originally inhabited by a mix of people from the Nile Valley and Bedouins from Libya. At that time, evidence suggests that the Oasis was much larger than it is now, but no settlements dating to the Predynastic, Early Dynastic or Old Kingdom have thus far been unearthed.

By the Middle Kingdom, Bahariya was known as Zeszes, and definitely fell under the control of the Egyptian kings, though only a single scarab (inscribed with the name of Senusret) from that period has been found in Bahariya.

Yet, documentary evidence provides that both Amenemhet and Senusret II began to pay considerable attention to the Oasis, probably to deflect regular attacks from the Libyans. At that time, there must have been large agricultural estates, large houses for the landowners, and even military garrisons to keep marauders at bay.

Agriculture was, as it is now, of major importance to this community, and wine, as well as other goods of the Oasis, made their way from here to the Nile Valley by donkey caravans along two different routes.

However, during the 15th Dynasty, when Egypt was under the rule of the Hyksos kings from Palestine, there was a lapse in trade with the Oasis, presumably because the trade routes were unsafe. 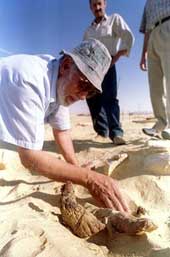 At that time, we find only one text that refers to the Oasis, when King Kamose refers to it as DjesDjes, the word for the region’s famous wine.

Under King Tuthmosis III, many improvements were made in the Oasis, including new water wells.

His reign marked an increase in the local population. At this time, the Oasis was under the control of Thinis (Abydos), to which they paid tribute.

We find visual evidence of this in the private tomb of Rekhmire, who was Tuthmosis III’s vizier.

One scene portrays the people of the Oasis, wearing striped kilts, presenting gifts of mats, hides and wine. However, the Oasis apparently had at least a governor who was a native of Bahariya, for the oldest tomb so far discovered in the Oasis is that of Amenhotep Huy, where his title is given as “Governor of the Northern Oasis”. The tomb is dated to the end of the 18th Dynasty or the beginning of the 19th.

By the 19th Dynasty of Egypt’s New Kingdom, the Bahariya Oasis became even more important because of its mineral abundance.

Even today, the mining of iron ore continues to be a vital industry.

Even Ramesses II, in the Temple of Amun at Luxor, refers to the Bahariya as a place of mining.

Of course agricultural products continued to be important in the Oasis, including dates, grapes, figs, livestock and pigeons (for food).

During the 25th and 26th dynasties Bahariya Oasis flourished as an important agricultural and trade center.

Specifically, by the 26th Dynasty, Bahariya prospered with its own governors who were natives of the oasis.

They apparently continued to report to Abydos, where there apparently remained a governor over all of the Oasis.

By the time of Ahmose II (570-526 BC), the importance of the Bahariya Oasis was fully understood.

He sent troops into the Western Desert to defend Egyptian interests against the Greeks and Libyans, and acted vigilantly to protect this Oasis. To honor him, two temples were erected, along with a number of chapels near Ain el-Muftella (near El Bawiti). These temples were embellished even into Egypt’s Persian period.

During the Persian period that followed a series of takeovers by the Nubians and Assyrians, a strong military presence and garrison were established in the Bahariya Oasis. They may have been responsible for some of the antiquities that have been attributed to the Romans.

However, they could not stop the conquest of Egypt by Alexander the Great, once he decided to make Egypt his own.

It is very possible that Alexandria the Great traveled through the Bahariya Oasis on his way to the Oracle of Amun at Siwa.

At first, Egypt was a organized under a centrally controlled government headed by Alexander’s commander, Ptolemy, and the Bahariya Oasis immediately began to prosper.

Not only were trade routes reestablished, but the Greeks used the Oasis to establish control over the rest of the Western Desert.

In fact, they set up an extensive, permanent military garrison to protect the trade routes. During the Roman and Greek Periods, we seem to know more about the Bahariya Oasis than from any other period of time. It was during the Greek period that the cemetery known as the Valley of the Golden Mummies came into existence.

During the Greek period, we know that Thoth was worshiped in the Oasis, particularly in his Ibis form, while Hathor is referred to as the “Lady of Bahariya Oasis”.

Khonsu, the moon god and Amun were both called “Lords of the Bahariya Oasis”, though Amun was dominant.

The Romans made many improvements within the Oasis, building an impressive series of aqueducts and wells, several of which are still used in Bawiti and Izza today.

This oasis was important to the Romans as a breadbasket, and we find many tombs dug into the sides of the Bahariya mountains during Roman times.

There were public works projects, new agricultural communities were formed, roads were cut, and thousands of mud-brick buildings were constructed.

During the Christian period, when Egypt continued under Roman rule, Bahariya was known as the Oasis of al-Bahnasa.

There are many churches in the area, including a church named after Saint Bartholomew.

There was also a monastery that stood in Bawiti called Dar al-Abras, the Lepers’ Refuge, there had been crosses engraved on the walls, paintings, and contained many old writings.

Bahariya was known as the Northern Oasis, or sometimes as Waha al-Khas during the early Islamic period.

How exactly the religious pecking order of the Bahariya was made up during the Christian and Islamic periods is unclear, but it is evident that the Oasis had a considerable Christian community until the 16th or 17th century.

Amir Ibn el-As, the commander of the Arab army that conquered Egypt, sent troops to ensure political stability within the Western Desert.

During this period, the oasis suffered considerably, as did most places in the Western Oasis; sand dunes covered cultivated land, and the trade in wine was abandoned due to the edicts of Islam.

Taxes were now levied against dates and olive oil. Much of this period is relatively unknown to us, but the Fatimids, who had affiliations in Libya, may have crossed the desert in the conquest of Egypt at Bahariya.

Muhammad Ali, often sited as the founder of modern Egypt, made claim to the Bahariya Oasis, as early as 1813 and travelers began to visit the area.

Today, Bahariya’s history continues, more detailed than before. Besides archaeologists who seem to have an ever increasing interest in the Oasis, a genealogical history is also kept by several Sheikhs.

They not only record births, and deaths, but also surprising events, such as an encounter with a jinn or other supernatural creatures.

Three books are kept, including one in Bawiti, another in Mandisha and a third in the area of El Haiz.

Owing to a marked drop in agricultural land bought about by the declining water table under Bahariya, the Oasis suffered a sharp decline in population during the 1950s. It reached a level of no more than about 6,000 residents, but by 1986, the population increased to 20,000 and today there are about 27,000 people living in Bahariya.

This is mostly due to a new paved road system established in 1973 over the old caravan routes, allowing a better lifestyle as well as an increase in tourism.

Yet the Bahariya Oasis, though the closest to Cairo in kilometers, remains the most distant in time.

It has been slow to move into the modern world, a facet that is changing, but for at least the moment, this Oasis offers the visitor a step back in time into medieval streets and a rare, ancient culture.